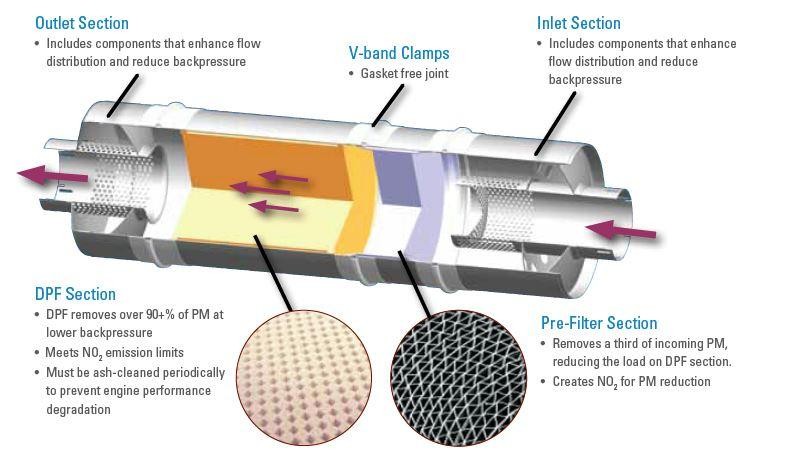 New diesel cars have required a DPF (Diesel Particulate Filter) to be fitted in the exhaust since 2009, when the 'Euro 5' exhaust emissions standards came into force. Cars registered before 2009 would also have had one fitted in anticipation of the change in standards.

These standards aim to reduce diesel particulate (soot) emissions by 80% but, as owners discovering with great expense, the technology is not without its problems.

HOW DO THEY WORK?

The DPF looks similar to a traditional exhaust silencer but is mounted close to the engine. The interior is a complex honeycomb ceramic structure that filters exhaust gases while minimising flow reduction, which would otherwise limit performance.

By forcing the exhaust gases through the walls between the channels of the DPF, the soot is deposited on the walls, reducing the amount of air pollution. Once the DPF reaches a certain level of saturation, it performs a regeneration cycle to burn off the soot inside the filter.

There are two types of regeneration: 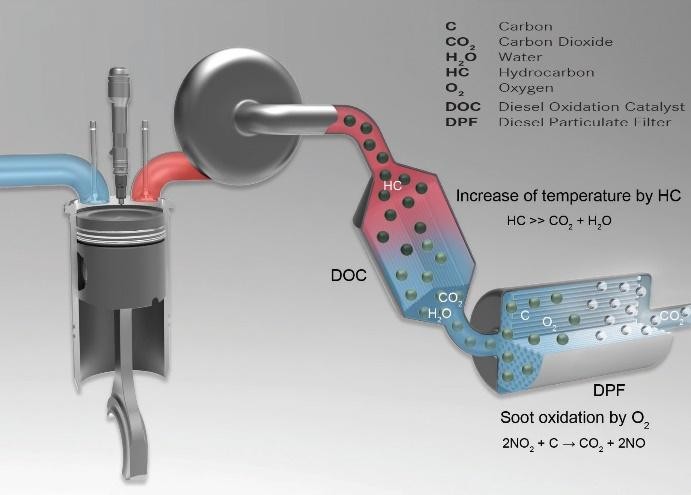 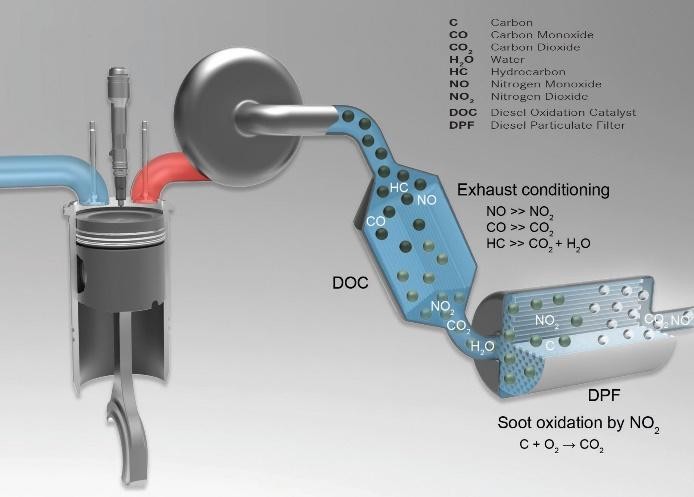 When the soot loading in the filter reaches a limit of 45%, the ECU will begin post-combustion fuel injection to increase the exhaust temperature and trigger regeneration. If you take your foot off of the accelerator during the regeneration process, it may not complete and the warning light will comeon to show that the filter is partially blocked.

Passive regeneration takes place automatically when the exhaust temperature is high. Because many cars do not reach this temperature, car manufacturers have to design 'active' regeneration, where the engine management computer (ECU) takes control of the process.

A car that is used on the motorway will run at warmer temperatures and produce far less soot than one used in a stop/start city environment. It can also regenerate more effectively, as it is in the perfect driving environment for this process to occur.

The operation of the DPF is controlled by the ECU and requires multiple signal feeds from various sensors to operate effectively. The most common type of DPF runs two pressure sensors and varying temperature sensors.

There is a differential pressure sensor mounted in the engine bay, which senses the pressure before and after the DPF. This pressure variance allows the ECU to calculate the percentage saturation of theDPF. Once the ECU establishes the saturation level, it can force a regeneration cycle.

The progress of the cycle is monitored by the temperature sensors and uses constant feedback from the differential pressure sensor to understand when the burn-off process is complete.

Some manufacturers use additives to reduce the ignition point of the soot particles by releasing small amounts of fluid into the fuel tank to mix with the fuel. The additive is a service item and is designed to be refilled approximately every 75,000 miles.

Ignoring the low additive warning will mean the DPF does not regenerate properly and you may require a new DPF. Certain models of vehicles, however, require the DPF to be changed with the additive top-up, which makes for expensive servicing bills.

DO THEY REQUIRE MAINTENANCE?

A DPF has a lifespan of about 75,000 miles but this depends on vehicle use and engine condition. Each time the ECU forces a regeneration cycle, it burns the soot down to smaller, finer soot which is not completely removed from the filter.

Over time, the fine soot builds up to a point where a regeneration cycle cannot be performed. At this point, the filter should be emptied or replaced.

Removing the DPF helps you to check the opacity of the exhaust emissions. This can provide some indication of any potential running issues, such as leaking injectors and engines burning oil, which can significantly reduce the life of a DPF.

There many reasons why a DPF can fail, including:

GST Motorsport are genuine software developers with unrivalled knowledge and experience in DPF Removal from modern ECU’s. Our DPF delete software ensures that you have trouble-free motoring after the DPF removal, and gives you peace of mind that your vehicle will never go into limp mode due to DPF regeneration ever again.

Modern turbo diesel management systems all accommodate the use of a ‘diesel particulate filter’ as it has become mandatory as part of Euro Emission controls.

The problem is that driving anywhere other than on a motorway could cause the DPF to clog up and force it to regenerate. A DPF has a regeneration limit where the compacted soot reaches a critical saturation level, at which point the DPF must be replaced.

With the DPF not being part of an MOT emission test, it is not a requirement for it to ‘function’ as a DPF. Our basic DPF remap switches off the functionality of the DPF, ensuring it never attempts to regenerate again.

The DPF filter must be removed from the centre of the exhaust core, ensuring all sensors are still in place and functioning. The DPF still looks to be in place with all sensors operational, without DPF traps and regeneration problems.

GST Motorsport’s DPF Removal software ensures that your vehicle operates without needing the DPF. Having a performance remap alongside the DPF remap provides even better gains than the DPF Removal alone. The benefits of DPF removal include:

Please note that we only offer DPF solutions for Off-Road Usage. It is not illegal to remove a DPF filter form your vehicle, but it is an offence under the Road vehicles (Construction and Use) Regulations to use a modified vehicle that no longer complies with air pollutant emissions standards. Removal of a DPF will almost invariably contravene these requirements.

How to book for your DPF Delete with GST MOTORSPORT

To get more information on your particular vehicle, visit our Contact Us page and send through an enquiry, or contact us today on 071878 7992 to speak with us directly.

Get a quote to remap your vehicle.

Whether you're looking for an economy or performance remap, get in touch with us to get a quote to remap your vehicle.

Get a quote now